We pride ourselves on treating everyone like family, even if you don’t have the last name Smith. We like to think that’s why we have some of the most loyal and dedicated customers. We have families who have been using our milk delivery service for decades.

“I always thought it was kind of cool that a few of my [current] customers were originally kids, getting milk delivered at their parents’ homes. Then they grew up, got married, had kids of their own, and I was a milkman for both.”

Growing up in Lake Tapps, both of Brent’s parents had their own milk delivery route. It only made sense for him to continue the family tradition. He started as summer help in 1995, which meant running the dairy products up to the customer’s door. Brent eventually earned his own route in 1999. And finally, became a route manager in 2017.

Ask any of our milkmen what they enjoy most about their job, and you’ll likely get the same answer: the customers.

John Ferguson, route manager at the Woodinville depot, enjoyed the customers he met along the way. As someone who has always liked serving people and building relationships, being a milkman was a great avenue to do exactly that.

What started as a casual summer gig for John in the early 1990s, turned into an opportunity of serving hundreds of customers for many years while supporting his family. 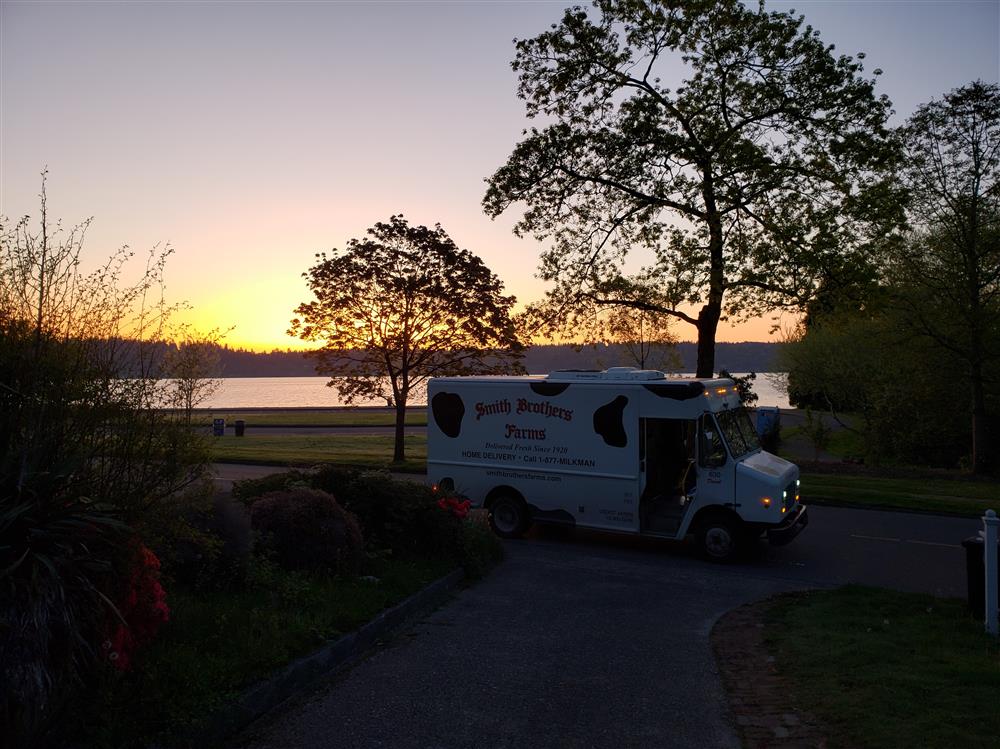 Delivering to homes every week, you get to know one another; relationships begin to form. The customer's weekly standing order soon becomes memorized: one dozen eggs, two half-gallons of whole milk, and two loaves of white bread. A milk bone is left for the four-legged family member. Holiday cards are exchanged. Birthday presents are left in the porch box for one another.

He is no longer just the person who delivers milk every week. He becomes a part of the family.

You can’t say that for most, if any, delivery services.

Logistics and routing manager, James Kostoroski, worked in the newspaper circulation business for more than 20 years before joining us this year. Transitioning from the newspaper industry to the dairy industry, he’s noticed something different between the two.

“Over the past 30 years, newspaper delivery evolved from kids delivering to the porch in the afternoon, to motor route drivers delivering to tubes and driveways in the middle of the night. Smith Brothers Farms still delivers right to the front door.”

In a lot of ways, the paperboy and milkman are alike. The memories of being greeted at the door with a friendly smile holds a prominent place in many people’s minds. While the number of paperboys have dramatically declined in recent years, the milkman does still exist in the Puget Sound area – thanks to our customers and their support.

There's a quality that many of the milkmen have, and that’s the inclination to help others. Jaireme Barrow, the route manager at the Kent depot, liked the idea of getting paid to exercise. After all, it was what initially led him to the job back in 2002. But he soon learned it was the opportunity to make someone’s day was what he looked forward to most.

“You deliver more than just milk as a milkman. You deliver the dream! There were many times I’d help repair a customer’s car to get them to work, bring their morning paper to their porch, and sometimes even deliver their dog that had wandered from their yard.”

When Jaireme was a milkman, he prided himself on making sure every delivery was made – snow or shine. That’s still true for him, even as a manager. If a milk truck gets stuck in the snow, he is there with his Jeep towing it out.

John, Brent, and Jaireme don't go on routes as much as they used to, but they still get to forge relationships – with the milkmen.

“We have such a great group of hard working milkmen that I manage, and I appreciate each one of them,” said John. “Smith Brothers Farms has many quality folks, and I am proud to have made many lifelong friendships from my time here.”